Lockdown Perfume and a Little Bit of Lippy


I wrote this in response to the theme of a workshop run by the excellent Dave Martin and Hannah McDowell of the Centre for Policy on Ageing - An Artistic Exploration of Ageing.

This began with an old, French film “Une Aussi Longue Absence”. Made in 1960, in the spirit of  poetic realism, it is about a café owner who believes a tramp wandering around her neighbourhood is her husband who disappeared during WW2.  I am reminded of all that I love about a Paris I never knew beyond my imagination.   Flavours, smells and   perfume even though there is none of the glamour we associate with it in the film.
Then I recall a dark blue  bottle of “Soir de Paris”  that, as a small child,  I found in the  drawer  where my mother kept her make-up. 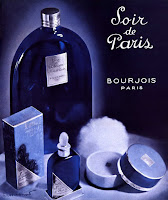 My first encounter with perfume and its power.  I think that Therese, the protagonist of “Une Aussi Longue Absence” as an unvarnished woman, pretty much like my post-war, everyday mother,  would have just such a bedroom drawer containing a small, blue bottle of intimacy.
In the drawer beneath it were some long, black, suede, evening gloves with tiny, pearl buttons at the wrist.  To go with a black ball gown with a big taffeta skirt hanging in the wardrobe.  All nothing without that “Soir de Paris” because that was the very essence of the kiss goodnight. The smell of your mother leaving. That very particular intimacy.
Perfume operates in two ways on your body;  within to your sense of self and how you want to be, then outwards to the physical, social environment you are part of.
Right now, in the Age of Covid,  it’s an outrageous  gap in our ways of being.  I can only please myself and not those others, particularly my significant others two metres or more away from me.  A sensory deprivation that’s slipped under the radar.
So.  The perfumes that span my life.   First, Je Reviens by Worth. The bottle the same, dark  blue as Soir de Paris.  your body absorbs an inheritance as special as a grandmother’s recipe. 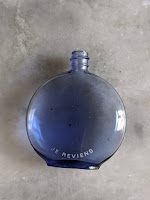 Created in 1932 Je Reviens is born of a  jazz age Paris   It’s  delicate, pale blue box with white, neo-classical detail masking  the dirt and the decadence of the then as much as the now.

Then Yves St. Laurent’s  Rive Gauche. Launched in 1970,  it captured the immediacy of  sex in a silver, bright blue and black metal tube.  Sex masked by a sharp, black tailored suit and crisp white shirt, the only give-away lips smeared with some Christian Dior Iconic Rouge.

Later, two or three  bottles of the democratically priced Marianne,  the perfume created to mark the bi-centenary of the French Revolution in 1989.  Long discontinued, I crave it still. 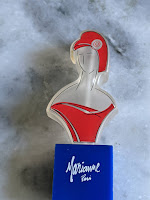 And  Dior’s  Poison.  The first bottle presented to me by my then  long-term boyfriend. He said with some irony his sister had chosen it for me on a return trip from Pakistan.  But I loved it and loved it for all the right reasons.

But. Dawn Sturgess.  In 2018  gifted a boxed perfume by her partner who  had found it in a charity shop bin.  It contained the same Novachok poison Russian agents intended to murder the former intelligence officer Sergei Skripal.  Dawn died a few days after spraying her wrists with the deadly substance.  A tragic heroine like Therese of “Une Aussi Longue Absence”, perfume the poetic corollary.

Our lips are now negated by a face mask.  The silent scream of a new world of invisible deadly droplets and fear.  A call out on the street that you are a good citizen, just part of the mass. Just like everyone else. Just not easy in your skin in the way you should be.  The way you feel when you put on your lipstick just before you present your public self to a world you want to have a stake in. The way you feel when you spray your wrists and neck with a little sensuality.

In 2019 I enthusiastically read Ashton Applewhite’s “This Chair Rocks: A Manifesto against  Ageism” and was immediately drawn to this conc... 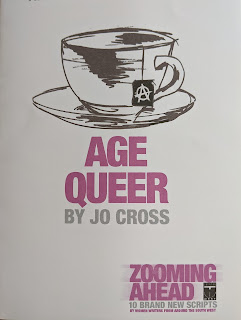 Jo Cross
Much of my working life has been spent as a drama teacher in east London, beginning my career at South Hackney School in 1976. I was also a regular contributor to Chat’s Palace Community Theatre in Hackney. I moved to Somerset with my daughter in 2000 to look after my mother. I continued drama teaching part-time whilst studying for a sociology degree with the OU. After my mother’s death, I gained an MSc with the University of Bristol, following this up with a PhD in 2015. I kept in touch with education lecturing on Childhood Studies courses and running schools' workshops at Bristol Museum. Bristol has afforded me great opportunities to re-skill as an actor / theatre maker. I am a member of Equity, Diverse Artists' Network and the lead on DIY Artists' Network Equality and Inclusion sub-group. I am a trustee of Travelling Light Theatre.