In February Elspeth Penny of 2BU Productions very kindly invited me to join a panel on ageing as part of a conference entitled ‘Vulnerability, Exclusion and Domination’. This was organised by Dr. Dagmar Wilhelm of the Philosophy Department of the University of the West of England - my thanks to Dagmar as well. The following is adapted from the talk I gave:


My particular interest in gerontology has been  aesthetic experience and the ways  it defines the best and the worst of later life, grounds our embodied sense of being in the world and accentuates the cultural diversity of older men and women.   My purpose has been  to flag up later life as not simply  a time of sensory loss, biological deficiency and dependency, but a  life elevated and dignified by aesthetic experience.


So what I’d like to develop today, hopefully in line with the themes -  vulnerability, exclusion and domination - are the ways in which aesthetic experience, as autonomous to the individual, tells us different stories.  Stories of lives that I believe are interstitial.   By this I mean lives lived betwixt and between the cracks, on the fringes of society and its normative expectations.   I’d argue that being interstitial generates a particular power if thought about as a challenge to those expectations.  A power driven by the particularity of aesthetic experience.


To better explain this I want to focus on two extraordinary women who have always left a strong impression on me.  To do this I need to go back to about 1971 when I was 20.  Living in London, doing odd jobs, bar work, temping like thousands of other young women who’d left school with nothing of significance.    On the look-out for the type of man who’d buy you a meal in a restaurant where you knew you could escape through the kitchens if necessary.  I remember being at a party in North Kensington with this kind of man. The sort of party where everyone is on the make, out to get what they want.  That imperative filtered through an atmosphere - I can sense it now -  infused by the taste of warm, white wine; the smell of garlic, sweat, stale aftershave, perfume and weed.  A toxic mix of excitement cut with nervousness.   I notice a beautiful, dark haired woman in a group across the room. Others do too.  Her presence, her back story, compounded for me that sense of being vulnerable, on the edge.


It was  Christine Keeler.  The model, topless dancer, or prostitute, as society of the time labelled her.  Notorious in the early 1960’s for her simultaneous affairs with the then secretary of state for war, John Profumo and a Soviet naval attache.  At the height of the Cold War no less.  If that wasn’t a taboo enough for the 1960s, at around that time Christine was also involved with a couple of African-Caribbean  men, Johnny Edgcombe and Lucky Gordon.  This volatile love triangle, involving a gun, then the police, lit the fuse that blasted the Profumo Scandal into the public domain. (1) 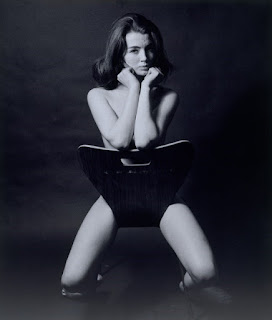 Whilst acutely aware of the exploitative nature of the worlds she moved in,  Christine, on her own account,  enjoyed sex and was clearly fond of many of her lovers.  She reserved her hate for the hypocrisy and corruption that circulated around the Establishment.


Inevitably, the popular media kept a constant watch on Christine throughout her life course.  She described with some irony how she was expected to take her clothes off for a later photoshoot re-presenting, as it were, the aesthetics of her youth.


Ultimately the press published paparazzi shots of her when she was much older and clearly in very poor health; no doubt taking delight in that she had conformed at last, conformed paradoxically to some acceptable version of drab, invisible, old age.


I believe Christine is representative of so many women now in their sixties and seventies.  And an inspiration for me in the development of a script about two older women, ever rebels and refuseniks who’ve negotiated the same challenges.  In later life they are predictably oppositional to the “middle England”, age appropriate version that takes no account of their culturally diverse lifestyles and identities.


Turning now to my second, extraordinary – or interstitial -  woman.  She is what you might call a “real fiction” – but then in many respects so is Christine.  Again about 1971,  I remember watching with my mum a “Play for Today” – an innovative series commissioned by the BBC. The play was written by Jeremy Sandford better known for authoring  “Cathy Come Home”. 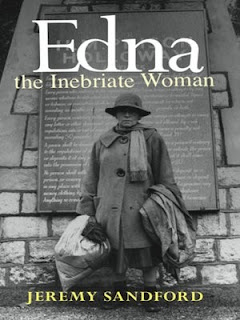 Directed by Ken Loach, this  play  triggered the founding of the homeless charity, Shelter.  Sandford again  pursued the theme of homelessness with  “Edna the Inebriate Woman”. [2]


My mum and I  were stunned.  Even without the award-winning  performance of the actress Patricia Hayes,  who played Edna, it was an incredibly powerful and coruscating work.


The play follows the destitute Edna on the road; an older woman, probably in her sixties, Patricia Hayes’s age at the time.  We see her progress through the grim environments of local authority doss houses, rough sleeping, prison, and a psychiatric ward. We witness her experiences of indignity; at one point when she seeks shelter in a doss house she is required to strip for an attendant to shine a torch over her hair and the rest of her body to check for vermin.  In the same, sharp detail we see her experience of  violence,  electric shock treatment,  her interactions with fellow rough sleepers, psychiatric patients and of course the authorities of the time.


Watching the play again, one scene stands out.  Edna is in the dock of a magistrates’ court having been arrested under the 1824 Vagrancy Act.  Distressed she shouts out repeatedly  at the magistrates: “ I am not the Vagrant, I am not the Vagrant..” A desperate plea to them, and us the audience, to recognize her essential humanity.  We, the audience, need no reminding.  Edna’s spirit, energy and resilience dominates Sandford’s play. She  transcends the bleakest of environments imaginable. Visceral, in that watching “Edna” many years on I still feel physically unsettled and emotionally haunted.


Remarkably, the 1824 Vagrancy Act still exists and if other stuff wasn’t currently getting in the way, hopefully stands a chance of being repealed. What we do know is that there has been a significant increase in older men and women rough sleeping in the UK.  Excluded physically, culturally and politically from society in circumstances no different from the 1970s.  They are utterly  removed from the representational aesthetics of ageing  purveyed by the UK’s charities, the  media and policy makers.  The jolly, glowing ‘Active Agers’ reflective of   a conventional, Western, retirement model of later life. Or the anonymized, faceless body in a cosy, centrally heated cocoon; framed by supportive arms and metal frames or reducible to a single hand enclosed by a much younger one.


To return to Christine and Edna and what  these brief sketches reveal of lives lived in the cracks or beyond societal norms.


Firstly,  the essential vulnerability of being a woman and in Christine’s case, being  an object of the male sexual gaze throughout her life until she ceases to deliver.  For Edna, being the embodiment of disgust to the point of dehumanisation. But secondly, I’d suggest that both women never conceal their appetite for life whether that be sex, physical intimacy, drink, the frisson of sociality, the vigour to survive, live dangerously  and  flout  moral prescription. Therein lies the power of their interstitial status. They are both sensual women.   Driven, for better or worse, by their aesthetic experiences as ways of being in the world.  For our part, we need a heightened sense of awareness that extends beyond the visual.  Tap into other sensual modalities to better understand what delights and repels if we are to better understand later life and its infinite cultural diversity.


[1] The image is that iconic photograph taken by Lewis Morley in 1963.
[2] https://www.amazon.co.uk/Edna-Inebriate-Woman-Jeremy-Sandford-ebook/dp/B007EDLBE0  Image from one of the scripted versions.  The entire play available online.

When I was doing my PhD I belonged to the British Sociological Association’s “Aging Body and Society” special interest group.   I recall... 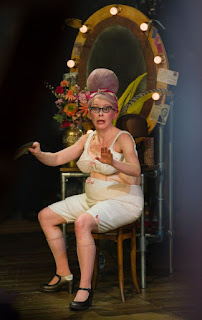 Jo Cross
Much of my working life has been spent as a drama teacher in east London, beginning my career at South Hackney School in 1976. This was a great time for the development of community theatre and I was a regular contributor to Chat’s Palace in Hackney. I moved to Somerset with my daughter in 2000 to look after my mother. I continued drama teaching part-time whilst studying for a sociology degree with the OU. After my mother’s death, I gained an MSc with the University of Bristol, following this up with a PhD, my thesis “Truth to the Materiality of Later Life: the Significance of the Aesthetic for the Support of Older People” (2015). I kept in touch with education lecturing and teaching on Childhood Studies courses. I have renewed my interest in drama and theatre, re-skilling via the Bristol Old Vic’s Adult Company and securing an Equity membership via actor/character work for Bristol Museum and Art Gallery. Right now I want to use my life experience, personal and professional, in the arts and the social sciences, to make visible the real cultural diversity that characterises the way we wish to live out our later lives.