Myself and Rebecca Braccialarghe, as respectively Hecuba and Cassandra, given yet another lease of life in an early draft  of The Black Overcoat. As captured in this image I am  feeling the cold. 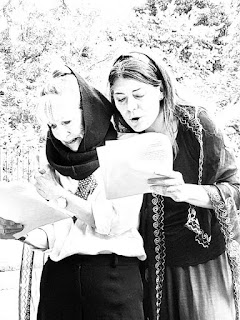 Another rehearsed reading for our summer slot at our spiritual base – Café 5, Easton Bristol. I hastily adapted early script for the above to fit Richard Worsnop’s theme of War in Times of Love.

But ‘The Overcoat’ has been a brief working title.  Yes, I am profoundly influenced by Nikolai Gogol and Wolf Mankovitz’s brilliant play “The Bespoke Overcoat” and the relevance of both to anticipated fuel poverty in the U.K.

There’s potential in this but I am mindful of Gecko Theatre’s recent interpretation of Gogol’s story. The Overcoat — Gecko (geckotheatre.com) I am also aware of the near universal association with the Shelby gang in Peaky Blinders.  And, relevant to Richard's theme, this image of a young Russian man wearing his grandfather's military overcoat on the subway, the back inscribed with anti-Putin slogans.  (A link needed for this). 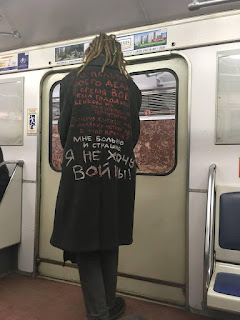 A future title might be“Bespoke”, given the connotations of the word.    A counter to the mass-production of warmth which we take for granted whether it’s a new boiler, an anorak or a duvet.  Anyway this is on the back boiler and the script as such has been fun to develop thus far.

The Overcoat in my script is a character, speaking in verse:-

THE OVERCOAT:  Before you jump to conclusions,

Let me tell you,

I’m a cut above. Superior.

My origins on the back of a fat, greasy sheep,

But the very matter of my being  universal.

First the swift caress of the tailor’s chalk,

before  a brutal  intimacy with the very latest treadle machine.

Second, the  tender tickle of the tailor’s needle and the exquisite pull of the waxed cotton.

Third,  a  communion  between myself and yards of  blood red satin lining.

Tiny stitches, a gentle   nibbling as we merge,

And four fittings!  Yes, four! Moulded and massaged over the broad shoulders of the man who

will never pay for me.

Never pay for me to protect him from winter’s bite.

Never, from this moment in time, mark him out  as a man of considerable means.……

(and further on in the script)

THE OVERCOAT: Don’t forget I’m superior.  A cut above.

A work of my  tailor’s art.

And you’ve taken me for granted for decades.

On the ample backs of kings and generals,

Or day and night on the shrunken frames of men

No  poppy  on my lapel

Take care when you unpick my stitching,

Take care when you deconstruct me.

Myself and Rebecca Braccialarghe, as respectively Hecuba and Cassandra, given yet another lease of life in an early draft  of The Black Ov...